Well, not anymore, but there sure was one last Saturday. He spent most of the day there, too. I downloaded

Well, not anymore, but there sure was one last Saturday. He spent most of the day there, too. I downloaded pictures from my camera last night and Brian was sitting next to me. I pointed out this one. 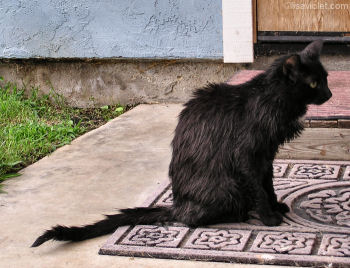 Brian just looked. He got quiet. See, last Saturday, Brian left his shop door open while he vacuumed the pine needles from the street. Easier to just put the vacuum away, I guess. Something I've asked him time and again to not do. Why? Because his old tractor is in there. And below the engine of his old tractor was a oil pan, about two feet in diameter. And it had an inch or so of old engine oil in it.

Now, I'm not much of a nagger. I don't see any purpose in it. I don't like nags and I don't ever want to be considered one. But this was one thing I repeatedly requested. Please shut the door if you're not going to be around. Because that oil pan is just an accident waiting to happen.

And last Saturday, it happened. Brian was done with the vacuuming, had the machine put away. I went outside to check on the cats and Ross looked like he'd fallen into the pool. I looked down by the pool and saw no wetness where a cat might have climbed out. Odd. I went over to pet Ross, and ran my hand down his back and all the way to the end of his tail. My hand came up dripping wet with oil.

I immediately went into the house and out to Brian, who was washing my truck. I read him the riot act. Then I went back into the house, grabbed the Dawn dishwashing detergent and got some clean towels from the hallway closet. I turned on the hot water in the bathtub, so that it would warm up. While it was doing that, I went in search of Ross. I finally found him and brought him into the bathroom, shutting the door behind us. I turned off the water, let the tub drain, then started it up again, this time adding some cold water so I ended up with about an inch of warm water in the tub.

I set Ross in it. He didn't like it very much. I got his back wet and squirted Dawn on him. I suds him up really good, getting his back, his belly and his legs. I did a double dose on his tail. He kept trying to get out, but I'd just block his way with my legs. When I'd gone over him a couple of times, I drained the tub and had a gentle warm spray of warm water that I used to rinse him thoroughly.

Then I lifted him onto a clean towel and rubbed him vigorously. I used all three towels to dry him. Then I opened the door and out he ran. I took the towels, put them in the laundry room, then went back out to yell at Brian some more, after I called Poison Control to make sure there was nothing else I should do.

Then I went into the house and noticed spots of oil all over the tile floor in the family room and dining room. I got the Floormate out and ran it over those areas, getting most of the bad spots up. I cleaned up the machine, then went back out to Brian again and gave him a little more of my mind (I gave him so much, I'm surprised there was any left).

He promised to get the oil taken care of as soon as he finished washing the truck. Then when the truck was finished, he came inside and asked if I could take him down to Ford to pick up his mom's van. I asked "did you get rid of the oil?" He acted all put out "I didn't want to get dirty." Gah, that set me off again. He walked out of the house, back to his shop and took care of the oil. He didn't get dirty. Ten minutes. It didn't even take him ten minutes to get rid of something I've been asking him about since last year.

I took him down to Ford, not saying much. Later on, when he got home, he asked if I'd pick him up from Ford, since they could take care of a problem he was having with his truck that same day. I guess my response wasn't a positive one and he walked home. I can be pretty scary, you know.

Anyway, Ross is better, I was speaking to Brian by late afternoon, he admitted there was no excuse, he was just lazy.

And we all lived happily ever after.