Friday, January 28, 2005 My back is killing me right now. I have no idea what I did. It was find Wednesday night, then yesterday morning, it hurt. We went for our walk and I was okay, it hurt a little, not much. Then, as the day wore on, it got worse. I hope it starts getting better soon.

The kittens have learned the cat door. With a little help from me. This is good. So far, they're better at coming in than going out. They'll stand there and stare at it. Look up at me. Look back at the door. I'll leave. Then I'll see a kitten or two outside. And it's also nice in the morning. I get up early and open the sliding door in the living room so the cats can go outside for a little while (Little Bit goes out, too). Well, the heat comes on at a quarter to six in the morning and I like to shut the door when that happens (I lay in bed, imagining all of the ping pong balls going out-remember that energy conservation commercial with the refrigerator?) So, now, I get Little Bit in if she's still out and shut the door. The kittens can come in when they're good and ready. And they're usually all back in the house by the time we get out of bed.

It looks like it's going to be a white day. I don't like white days. A white day can happen at any time of the year. You can't see any blue sky at all. There is no definition to the clouds. Just an off white blanket of sky.

DeeJay is losing weight again. But from the food left in the morning, it looks like the cats aren't eating as much as they had been. I wonder what the deal is. DeeJay is still pooping fine and it looks like he's eating a lot. But we ran out of Trader Joe's cat food a month or so ago, so he hasn't had that as a supplement. Maybe that's the problem. Right now, he's snoozing on my sewing machine cabinet. It's got a heating pad on it and he likes it there. I've noticed that sometimes there's a cat nearby waiting for their turn. Doesn't matter to DeeJay, he'll lay with another cat if he has to. He likes that pad.

I spent last weekend trying to get another option of my family album working and after some major help from the script author (really bonehead mistake on my part), I was able to put up a couple of QuickTime movies. My favorite is the one of Angel. It always makes me smile. We also had some nice sunsets, which I was able to get photographs of. Those are up in the "Naturescapes" section.

(I've got some company paperwork I absolutely have to get done today and time is a wastin'...I'll be back with more catstuff later....)

Welp, dinner's et, cats is fed. It's raining outside, all of the cats are in (a couple of hours early, but that's the breaks when it rains). I only needed to get in Benny and Daniece and they were pretty easy. Daniece went running into the cat door, Benny came running to me. He really loves me. He's a mama's boy, that's for sure. Of course, they're not at all happy to be inside and we've got a couple of whiners at the door.

"Let me owwwwwwt....I want to go owwwwwt....owwwwwt in the darktiiiiiime....." So far, Benny and Potter are being the most vocal, but with any luck, they'll soon settle down.

Brian and I are both online and Marco is being a big pest. He's walking in front of us, stepping on keyboards, blocking monitors. Brian's much more tolerant of it than I am. He lets them annoy him, I put them on the floor. (Now Pete's crying to get out, tough beans, I say.) 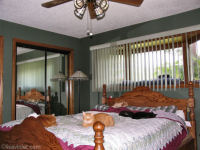 It's a cozy place

I'm usually pretty good about making the bed. I have it down that I can move this cat this much and make that part of the bed. Then I move that cat off of the pillow and straighten out that part of the bed. Sometimes I get lucky and there are no cats on the bed. When I see this, I immediately make the bed, I don't give it a chance to get covered in cats again. But today, I figured what the hell, I'd let the cats have it.

I also did a little re-organization of the extra room (used to be the exercise (ha!) room) and tried out the airbed. It's nice. Fits just right. There have been a couple of times the past few weeks I ended up on the sofa. One morning I woke up and Brian was gone. He was out in the recliner. The cats just sometimes get to be too much for us. It's funny, but they aren't as bothersome when I'm on the sofa. Maybe because there's not as much room. Whatever. 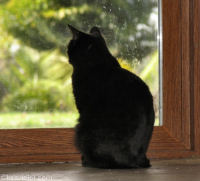 Little Bit is settling in more and more. I feel so bad for her, keeping to herself all day. But little by little, she's not running when she sees us. She still hisses at the other cats, though. She hates her kittens. It was a year ago that we had Notwally in our yard. I wonder how those calicos turned out. If any of them had long hair. Long hair calicos are beautiful.

Annie hasn't put on much weight since her extended hospital stay and her fur isn't growing back very quickly, either. She sleeps a lot, but she's still pretty affectionate. Now that Brian comes back here every night (that internet is pretty addictive, ya know?) she's got more company. Even though there's not much talking, we're here.

The cats are eating us out of house and home. Brian bought 40 pounds of food last Saturday and we're getting low. Well, all of the feeders are filled, that's close to ten pounds there, I'd say. But still....

I was watching the kittens play this morning. It was funny to see the older cats joining in. Even Lisa was running down the hallway. She wasn't hissy or anything, so I know she was playing. This evening, I got some video of Walter on the bed with his paw around Ross and one of the kittens was suckling on him. When I figure out how to transfer it to the computer, I'll put it up over on the family album.

Well, that's it for tonight. Stay warm and dry.

To see more exciting and fun journal entries about cats, be sure to check out this week's "carnival of the cats" being held at Watermark (a poet's notebook).