So, this afternoon, the DH mentions that he's hungry and "what are you going to get me?"

So, I get up, go into the kitchen, get out the homemade rolls I made, leftover turkey, cheese, mayo and mustard. I set out two plates, sliced the five rolls and put them out assembly line style and made five little turkey and cheese sandwiches. Of course, I had a couple of beggars in the kitchen, Handsome being front and center.

I ignored them all.

I put three of the little sandwiches on one plate, two on the other and came back into the office and set the plate with three next to my husband's keyboard. Which was in front of the chair the cats use to climb up onto the desk. Bad move on my part.

Handsome followed me in. I saw him get up on the chair. I told Brian "You'd better watch him!" and before I'd finished my warning, Handsome had taken the top piece of bread, along with the piece of cheese stuck to it, off and was on the floor eating.

I captured part of this on camera. 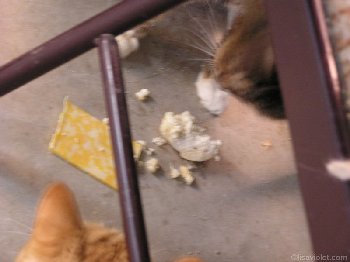 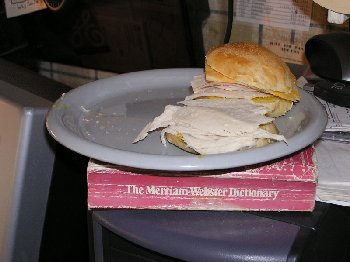 What was left of the sandwich 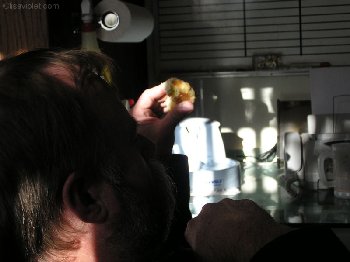 DH halfway through his first sandwich 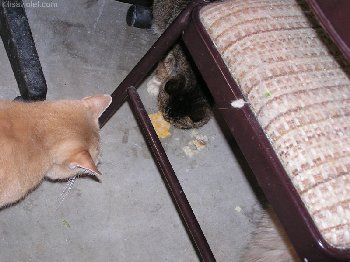 Most of the bread gone, Handsome starts on the cheese, growling a warning to all cats who get too close 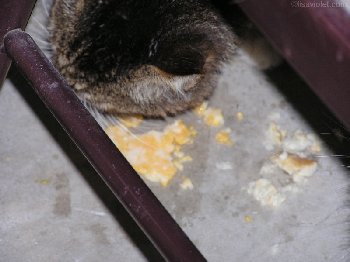 The cheese is a little harder to eat, since it's stuck to the floor 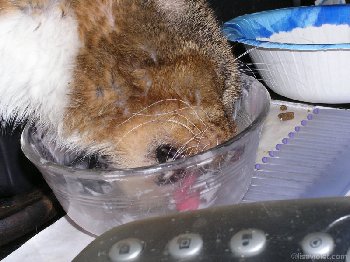 To top off a nice snack, some homemade peppermint ice cream

Be sure to visit this week's Carnival of the Cats which is being hosted at IMAO.