cat stuff
Thursday, 05/12/2005 - 10:36 AM PDT
By the way, really nice
Listening to The Kinks Are The Village Green Preservation Society
The topic: Gardening

Last Saturday, we went to Denny's Diner in Santee for breakfast. Our usual Saturday breakfast restaurant, Izzy's Cafe in El Cajon was closed for a two week vacation. (If you're a San Diego local, try it, they're open Monday through Saturday for breakfast and lunch; great food, great prices, great service.) I kind of wanted to look at those little rolling cultivators for around the pool area. The weeds were coming back after all that work the gardeners had done. Pulling the grass is not the same as digging deep and getting the roots and as long as the roots are there, the grass will come back.

So, after breakfast, we drove over to Home Depot and I got my little cultivator and we also looked through their plants. Since we can't afford to pay the girls to buy the plants and do the work, we thought 'what the hell' and Brian picked out some ferns and I picked out some of those really neat "Lily of the Nile" plants. Brian had been reluctant to get anything with color for the bank area, since when they're not in flower, he really doesn't care for how the plants look. But these Lily of the Nile plants look okay without flowers, they'd blend with the rest of what we've got there. So, we got some of those to go with the ferns.

When we got home, Brian placed the plants on the new brick wall and the cats had to (of course) check everything out. (As usual, clicking on an image will take you to a larger version, over at the Family Album site.) 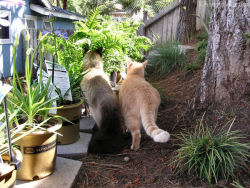 Sagwa and Oliver check out a new fern 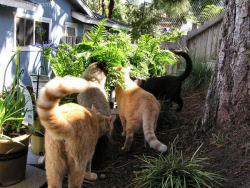 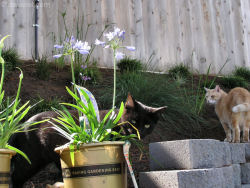 Joey sniffs the Lily of the Nile as Oliver looks on

I think one of the big reasons the ferns had such a deep interest for most of the cats was the fact that the Home Depot has at least one resident cat for rodent control. I saw this cat strolling through the garden section. 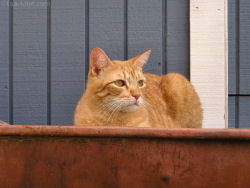 Opie takes a break from the inspection team, resting in the wheelbarrow

As Brian got the plants in the ground, the cats weren't quite so curious about the new stuff. They went off to their various daytime nap areas, while Brian planted and cleaned up the mess left by the gardeners. (They were hard workers, but Brian had quite a bit to do before the area by the side of the house was presentable; huge dirt piles from what they'd taken from the bank, tools, all of the aloe vera plants they'd pulled up....) 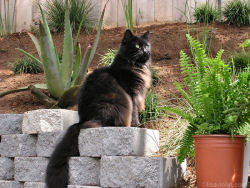 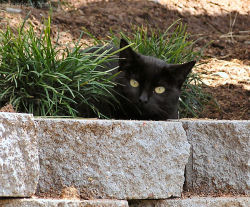 Even Little Bit gets into the spirit, laying down in the Mondo grass

Little Bit is still pretty shy, but she's letting me get closer to her. She just watches me, interested in what I'm going to do. She's not hissing at the other cats like she did so much in the beginning and I think she might even be ready to make a friend or two. That would be so nice, I hate to see her all by herself. 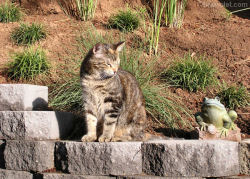 Rachel squints into the setting sun

I think the cats are really going to enjoy the plants. They already like grabbing at the taller plants and nibbling on the grassy stuff growing from the top. It's going to look really nice when it's all filled in (I just took a couple of photos and it's already looking fuller) and I know the cats will have great fun running, hiding from and chasing one another. 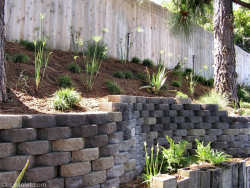 I'll be taking many pictures of them as they do.